​People and Crocodiles in the Andaman Islands 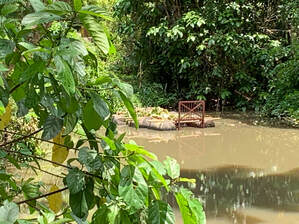 (Crocodile trap, Colinpur © Meera Anna Oommen)
Successful environmental protection occasionally results in consequences such as the significant increase in the population of target species. In the context of large apex predators such as saltwater crocodiles, this can translate to a greater number of attacks on people living and working in crocodile habitats and opposition to conservation as a whole. Recent collaborative work between Dakshin foundation and the Madras Crocodile Bank Trust addresses various aspects of human crocodile interactions, ranging from an understanding of conflict as an embedded element within larger networks of conservation and development, simulating interactions via agent-based models, ethnographies of crocodile attacks, understanding the psychology of fear and risk in relation to animal attacks, developing better monitoring and early warning mechanisms, and evaluating the potential of pragmatic conservation tools to mitigate conflict. This work is based in the Andaman islands, one of the last remaining geographies in India which hosts a significant population of saltwater crocodiles, and hopes to find middle-of-the-road solutions towards reconciliation. 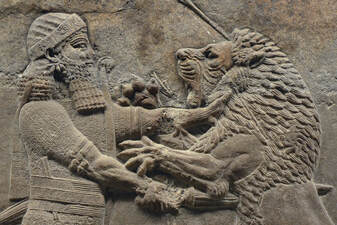 Carole Raddato, Sculpted reliefs depicting Ashurbanipal, the last great Assyrian king, hunting lions, gypsum hall relief from the North Palace of Nineveh (Irak), c. 645-635 BC, British Museum (16722368932) (cropped), CC BY-SA 2.0
​With a long history of over two million years, big-game hunting has been implicated in catalysing human evolution through nutritional and provisioning benefits. An alternate, controversial view proposes this practice to be a behavioural strategy for increasing male fitness through prestige and status benefits acquired from costly signalling (i.e. via a hunting handicap that confers benefits and eventual fitness through honest signals). My work on this subject includes longue durée explorations of big game hunting across disciplinary literatures, covering early hunting societies in the hominin evolutionary past, extant hunter-gatherer societies, and finally political and cultural big-game hunting as recounted within historical and mythological narratives.

​Results show that the evolutionary benefits offered by this behavioural strategy could potentially range from strong provisioning and selection benefits for some early Homo and emerging anatomically modern human (AMH) communities for whom hunting was integral to survival, to benefits from prestige and enhanced status in contexts where subsistence is not an articulated motivation for hunting. Such interdisciplinary explorations bring together insights from the biological and social sciences as well as the humanities, and emphatically supports the idea that the motivations behind big-game hunting, like many other aspects of human evolution, demonstrate a strong, reinforcing interdependence between biology and culture. 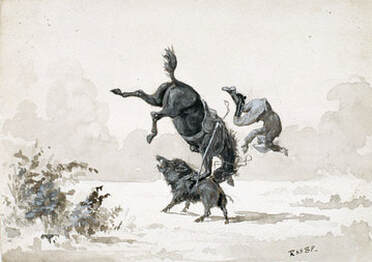 (Robert Baden-Powell, 1889)
The wild pig which is abundant in Indian forests, is even more of an ubiquitous presence in the agricultural landscapes along the forest fringe. Throughout its range, local people have perhaps spent more sleepless nights guarding fields from this species than all others combined. Enigmatic and intelligent, wild boar are known to challenge farmers, hunters and trappers in as many ways that have been devised to outwit them. This elusiveness and alacrity have not only given rise to a variety of regional hunting techniques but also to a range of cultural relationships that showcase this charismatic species in varied forms of religious and symbolic expression.

​I use several historical and contemporary vignettes to trace the diverse array of entanglements between people and pigs in India. ​These include a range of hunting engagements including traditional pig hunts and colonial pig-sticking, examples from iconography, representations of the boar in folklore, ritual, and religion, as well as examination of its central role in nutrition, subsistence and economic prosperity for some communities.

Fast and Frugal Approaches for Conservation 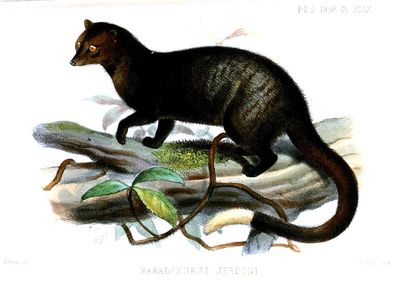 (Paradoxurus jerdoni, Joseph Smit, circa 1885
The scholarship on tropical global biodiversity hotspots such as the Western Ghats reveals that despite long-term research, our knowledge about species responses to habitat modification remains inadequate, leading to delayed decision-making on the ground. Moreover, such datasets are characterised by incompleteness and uncertainty, making traditional analytical approaches less effective for prediction. To overcome these drawbacks, I explore alternative conceptualisations to conventional field data gathering techniques and analytical methods such as regression analyses. Drawing on the vast literature on habitat suitability explorations, I use a combination of techniques to develop predictive models for mammalian species in the Western Ghats. The predictive potential of simple models such as naïve Bayes networks are examined.

​The models are constructed using different suites of habitat variables selected from published information, expert elicitation and field data by using fast and frugal methodologies. This work is informed by the broad conceptual foundations of bounded rationality and satisficing approaches that help in circumventing complex analyses and data collection to inform conservation in diverse, yet data-deficient tropical systems. 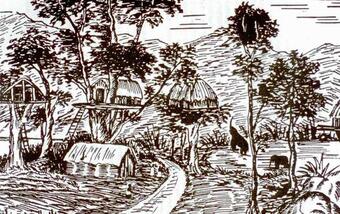 (Hill Mission, Mundakayam, Woodcut by Frances Ann Baker)
The forest fringe in Kerala's Western Ghats has been a site of long-term conflict between elephants and people. Over the centuries, elephants have played a dominant role in these mountainscapes: as antagonists to cultivators; as sources of ivory, labour and revenue to forest traders, local rulers and imperial administrators; and, as cultural and religious icons straddling forests and countryside. Environmental protection arrangements in recent years ushered in a new elephant, a charismatic flagship beloved of conservationists, but also a key actor involved in conflict.

​Using insights from different sources (ancient bardic poetry, archaeological research, colonial reports and recent oral histories), I explore long-term engagements by interrogating different phases in history, each incorporating a changing identity for the place in question: as a bountiful, ivory-rich forest at the turn of the Christian Era, as a site of colonial capitalist production, a refuge for impoverished settlers during famine years, and eventually as a contested conservation landscape. I show that contemporary conflict is, a complex ongoing narrative fuelled by interactions between the persistence of human and animal memories and by multi-scale socio-political catalysts with long histories of influence. 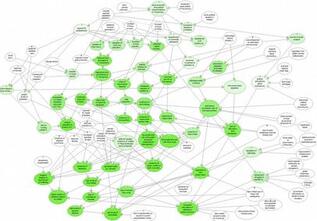 Lying between farmland and forest, the fringe is a contact zone for people and wildlife. In the tropics, these productive zones are beneficial to wildlife such as pigs, deer, monkeys, elephants and carnivores. My work explores the dynamics of a heavily populated forest fringe in Kerala, India, where extended periods of crop depredations and agrarian distress have resulted in an atmosphere of conflict resulting in retaliatory killings of wildlife and widespread opposition to forest protection.
​
This multidisciplinary enquiry, uses a mixed methods protocol ranging from Bayesian Belief Networks to oral histories and ethnographic enquiry to interrogate the interlinked components of conflict.

​Qualitative probabilistic networks are used to predict not only ecological suitability of different land use types for conflict, but are also useful in incorporating socio-economic and cultural components, linking decision-making frameworks and evaluating the effectiveness of predictions. 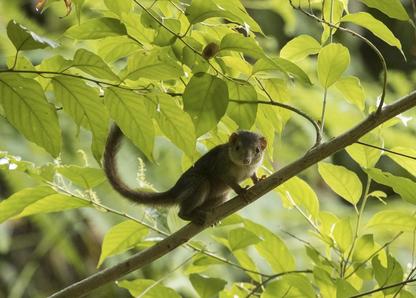 (Nicobar treeshrew, © Shashank Dalvi)
Treeshrews (Order Scandentia, Family Tupaiidae) are a group of tropical small mammals found in South and Southeast Asia. They were previously classified under different orders including Primates and Insectivora, and are considered by some to resemble primitive mammals. Currently treeshrews are placed in a separate order (Scandentia) and includes 19 species distributed among five genera. The Nicobar treeshrew (Tupaia nicobarica) is a small tupaiid with a restricted range found only on two islands.

​During the first field study of this species which I conducted on Great Nicobar island, treeshrews were seen to form a unique foraging association with greater racket-tailed drongos (Dicrurus paradiseus) sparrow hawks (Accipiter sp.).

​This study found that although foraging benefits seem to drive this association, predator avoidance also influences the kind of associations that occur, suggesting that strategies driving the formation of mixed flocks may be complex and context dependent with varying benefits for different actors. 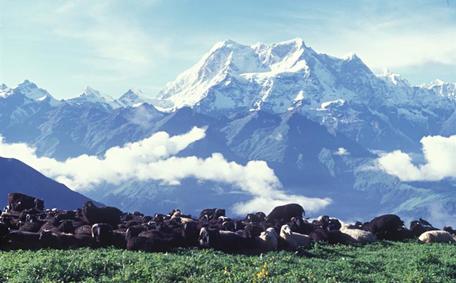 ​At the landscape scale, though the mechanisms explaining unimodal species richness patterns were hard to separate, the underlying correlates of biogeographic groups were distinct: temperate species richness followed mid-domain model predictions, and showed a nonlinear relationship with temperature, whereas tropical species richness tracked temperature and area. Simulations demonstrated that models with varying assumptions, while resulting in monotonic, unimodal, or multimodal patterns at local scales, could all lead to unimodal patterns at regional scales. When multiple local replicates are aggregated, richness peaks in the major ecotone. The turnover or successive accumulation of marginal species in ecotones potentially explains the mid-elevational peak in this zone. This study shows that landscape level data on abundances and distribution of species could be critical to understanding key aspects of macro ecological patterns.
Powered by